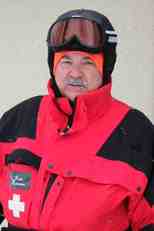 Ken Navarre, RIP 8-28-13
The National Ski Patrol lost a very dear friend on August 28, 2013 when Ken Navarre passed away. Ken began patrolling in the 1994 ski season at Mt. Brighton in Eastern Michigan Region and completed his senior in 1997. Ken transferred to Schuss Mountain when he retired and moved to Clam Lake. Ken loved all facets of patrolling but none more than teaching OEC. With his natural acting ability, Ken portrayed many accident victims in Patroller, Senior and Certified training and evaluation scenarios. His ability to help every candidate understand and apply even the most difficult concepts was envied by his colleagues. Ken touched the OEC training of almost everyone in Eastern and Northern Michigan Regions either directly or through someone he taught. He received National Appointment 9800 in 2003.

Ken entered Munson Medical Center for a Cardiac Catheter procedure on Tuesday, August 27th. During the procedure doctors found and treated a major blockage in an artery. Unfortunately, a large piece of plaque broke free and caused a fatal stroke. Ken was surrounded by his wife and children as he passed away on Wednesday, August 28, 2013 at age 73.